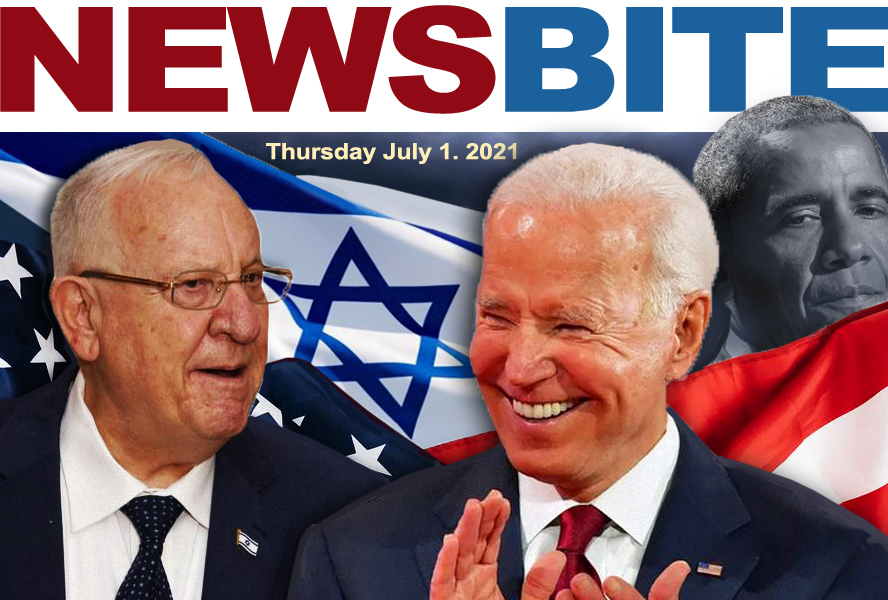 “Woe to the rebellious children,” declares the LORD, “to those who carry out a plan that is not Mine, who form an alliance, but against My will, heaping up sin upon sin. They set out to go down to Egypt without asking My advice, to seek shelter under Pharaoh’s protection and take refuge in Egypt’s shade. But Pharaoh’s protection will become your shame, and the refuge of Egypt’s shade, your disgrace.” (Isaiah 30:1-3)

Earlier this week a headline appeared in the online edition of IsraBite News, It read; “US President Joe Biden and President Reuven Rivlin met at the White House, where Biden vowed that Iran will never be allowed to achieve its nuclear aspirations while he is in office.” In the article it stated, “Iran will never get a nuclear weapon on my watch,” Joe Biden said, declaring that his commitment to Israel’s security “is ironclad.” Biden added that he has an “unwavering commitment to Israel’s right of self-defence against Iran, a country dedicated to the Jewish state’s destruction.”

Rivlin arrived in Washington for his farewell visit to Washington at Biden’s invitation. America’s chief executive thanked Israel’s president for the latter’s efforts to promote partnership, hope and understanding – both inside Israel and between the Jewish state and its neighbours. Alluding to Washington’s plan to re-join the nuclear accord with Iran and world powers, Rivlin said: “And according to a real friendship, we can, from time to time, discuss matters and even agree not to agree on everything.” (End of extract)

It would seem the Joe Biden says one thing but his administration still does the opposite. While Joe Biden says he will never permit Iran to get a nuclear weapon on his watch, it is mere rhetoric as his administration proceeds to re-negotiate the Iranian Nuclear agreement brokered by Obama in 2015. Joe Biden may be at the wheel steering the ponderous ship of the American government but behind the scenes Barak Obama is kicking the rudder that steers the ship. It would seem that President Rivlin has brought ‘the package’ being offered by the Joe Obama Administration.

Many centuries ago God spoke to Israel and its leaders through the Psalmist when He said; “Do not trust in princes, in mortal man, in whom there is no salvation. His spirit departs, he returns to the earth; in that very day his thoughts perish. How blessed is he whose help is the God of Jacob, Whose hope is in the Lord his God,” (Psalm 146:3-5)

And yet again God declares to Israel; “Woe to the rebellious children,” declares the LORD, “to those who carry out a plan that is not Mine, who form an alliance, but against My will, heaping up sin upon sin. They set out to go down to Egypt without asking My advice, to seek shelter under Pharaoh’s protection and take refuge in Egypt’s shade. But Pharaoh’s protection will become your shame, and the refuge of Egypt’s shade, your disgrace.” (Isaiah 30:1-3)

We know from God’s Word that Egypt metaphorically represents the world and Pharaoh metaphorically represents the god of this world Satan and by extension the man of sin, the Antichrist. While God is still sovereign and the earth and all of its fullness belongs to Him you also have Satan the god of this world controlling the minds and hearts and ambitions of wicked and unprincipled people at every level of society, from leaders of nations to the people in the streets. (Psalm 24:1) (2 Corinthians 4:4) As we are told in the New Testament, “The whole world lies in the grip of the evil one.” (1 John 5:19)

Right now Satan is at work in Israel. He knows that God’s prophetic purposes are aligned with the complete national and spiritual restoration of Israel. In his perverted thinking, his blind ambition and his malevolent dark desire towards Israel, Satan is all out to completely annihilate Israel if he can because he wants to prevent the return of the Messiah our Lord Jesus. We see this amply illustrated in the Book of Revelation where the Red Dragon (Satan) goes after the woman (the faithful remnant in Israel) but he does not succeed in destroying Israel. At the same time Satan goes for the Israel’s spiritual offspring the faithful Body of the Messiah spiritually engrafted into the Commonwealth of Israel. (Revelation 12:13-17) (Ephesians 2:14-22)

The two people groups Satan hates most on earth is the Jewish people and by extension and inclusion the faithful Assembly of the Messiah (the faithful Church). Satan is using his power to arrange things in such a way that Israel will be left without any supporters when the final invasion comes from the Turkish King of the North with his vast Islamic army accompanied by many nations. (Ezekiel 38:1-6)

In that day when it looks like Israel is about to be destroyed as a nation, the Lord will send back the Messiah our Lord Jesus to rescue His brethren from the man of sin and his armies surrounding Jerusalem. This army of the man of sin will be so numerous they will cover the whole land as a cloud covers the sky. (Ezekiel 38:14-16) The prophet Joel also sees this army and he describes them as locusts that saturate the land of Israel and destroy and devour all in its path. (Joel 1:1-4)

We are also told in the Book of Joel that the Lord will drive the northern army away from Jerusalem and push it back into a dry parched and baron land with its columns of soldiers going to their watery grave into the Mediterranean Sea and whose stench will arise up into the heavens. (Joel 2:20) At this time Jerusalem will have been ravaged and two thirds of the Jewish people will have perished in the land of Israel, but a third will survive, having been preserved by God, saved by the Messiah and having received deliverance as they have passed through God’s refining crucible.

They will have been refined like silver and tested as gold being refined. They will call on the name of the Lord and look only to Him and their Messiah and He will answer them; He will say; “They are My people” and they will say, “The Lord is our God.” (Zechariah 13:8-9) The Time of Tribulation unequalled in previous history and never to be equalled again is coming to the whole world. (Matthew 24:21-22) It will be a time of trouble for Jacob (Israel) but he will be saved out of it and they will serve the Lord their God and David their king (The Messiah our Lord Jesus) whom God will raise up for them. (Jeremiah 30:1-10)

In that day of great tribulation Michael the Prince who watches over Israel will arise and come to Israel’s defence and ‘go to bat’ for God’s people. Everyone whose name is found written in the Book of life will be delivered. Multitudes that sleep in the dust will be physically resurrected to enter into the Millennial kingdom of the Messiah to enjoy their everlasting life they received when they believed in Him for salvation.

At the end of the Millennium the others who have not been saved will be also physically resurrected to enter into shame and everlasting contempt and consigned to the lake of fire forever. (Revelation 14:9-11; 21:8) (Revelation 20:5-6, 11-15) Those in this life who impart God’s wisdom through preaching the gospel of the kingdom and sharing His Word with others will shine like the brightness of the heavens, and those who lead many to righteousness, like the stars for ever and ever. (Daniel 12:1) (Philippians 2:14-16)

With Benjamin Netanyahu gone and ‘a new boy on the political block’ who has as yet not been tested in national adversity, things may not look good for Israel. You have three leaders with differing political ideologies in the Israeli government. President Riven has Joe Biden’s reassurance that America will support Israel but if Obama has his way behind the scenes things will go bad for Israel. God’s Word still stands as a sentinel down through Israel’s long and troubled history. We are told in the Bible that “God’s Word is settled forever in heaven.” (Psalm 119:89)

And so God is still saying to Israel; “Woe to the rebellious children,” declares the LORD, “to those who carry out a plan that is not Mine, who form an alliance, but against My will, heaping up sin upon sin. They set out to go down to Egypt without asking My advice, to seek shelter under Pharaoh’s protection and take refuge in Egypt’s shade. But Pharaoh’s protection will become your shame, and the refuge of Egypt’s shade, your disgrace.” (Isaiah 30:1-3) That is the bad news for Israel.

However, the good news for Israel is that God is still holding out the cup of salvation to a spiritually backslidden Israel through the Messiah our Lord Jesus. God is still saying to His wayward people Israel; “Seek the LORD while He may be found; call on Him while He is near. Let the wicked man forsake his own way and the unrighteous man his own thoughts; let him return to the LORD, that He may have compassion, and to our God, for He will freely pardon.” (Isaiah 55:6-7)

But is Israel listening?