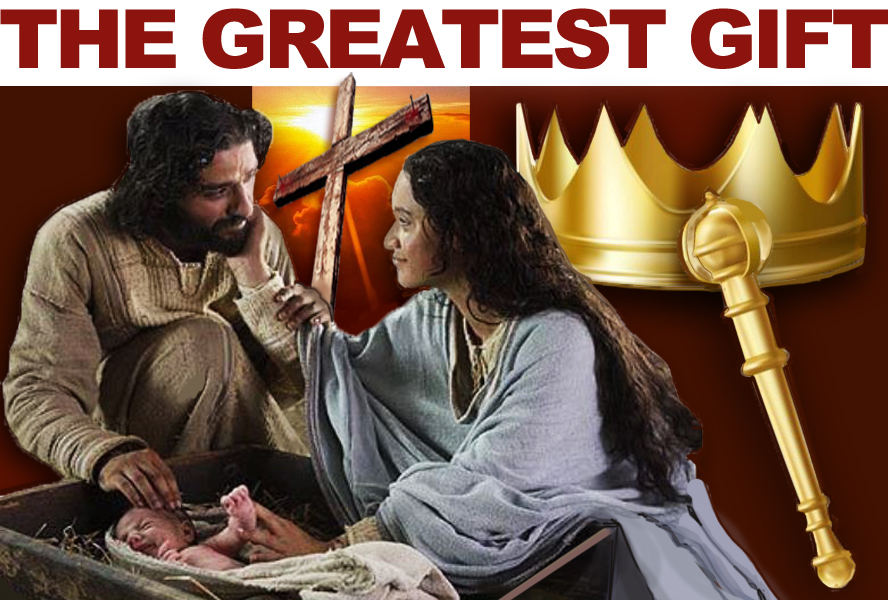 (Isaiah 9:6-7) “For to us a child is born, to us a son is given, and the government will be on His shoulders. And He will be called Wonderful Counsellor, Mighty God, Everlasting Father, Prince of Peace. Of the greatness of His government and peace there will be no end. He will reign on David’s throne and over his kingdom, establishing and upholding it with justice and righteousness from that time on and forever. The zeal of the Lord Almighty will accomplish this.”

Over two thousand years ago the Eternal Triune God became a man. We are told in the New Testament that In the beginning when everything was created and even before creation that the Word of God Himself, the pre-incarnate Messiah our Lord Jesus being the eternal Son of God and equal with God, became flesh and tabernacled among us (John 1:1-2,14). The Lord Jesus was fully God and fully human. Our minds cannot really fathom how this could be seeing God is one yet He is a tripartite eternal being in whom also dwells God the Son and God the Holy Spirit.

The Son of God Himself stepped out of His eternal heavenly dwelling and came down to earth to bring us back into right standing with His Father and to enable us to have a personal relationship with Him. We are told in both Testaments that one of His titles is “Immanuel” which being interpreted means “God with us.” (Isaiah 7:14) (Matthew 1:23). Isaiah the prophet is known as the evangelist of the Old Testament as he writes volumes about the salvation found in the Messiah our Lord Jesus.

In these verses in Isaiah 9:6-7 the Messiah our Lord Jesus is given titles that could only be given to God because He is God and the image of the invisible God and the co-creator of all things and existing before all things. He is the firstborn over all creation because all things were created in the heavens and on earth by Him and for Him. He is before all things, having existed in God the Father from all of eternity and holding everything together by His divine power. He is the firstborn man to be resurrected and to never die again that He might have the supremacy over the human race and the whole universe including the unseen spiritual world. God was pleased to have all of His divine fullness dwell in the Lord Jesus in bodily form (Colossians 1:15-19; 2:9).

Now in Isaiah we are told about His divine nature and His future Kingdom to come. Now let’s look at these verses found in Isaiah 9:6-7.

“For to us a child is born, to us a son is given, and the government will be on His shoulders”

When the Lord Jesus came into this earth the first time He did not establish and earthly kingdom but a spiritual one. Through the ministry of the Holy Spirit He established the Kingdom of God deep down on the inside of all who repented and believe on Him for salvation and were spiritually reborn from above (John 3:3). If you have been born again and received the Holy Spirit then the Kingdom of God has come into you. Having said this you are a part of his kingdom but As yet it is not seen in the world. The Lord Jesus Himself said that “His kingdom was not of this world (John 18:36). Through His followers the unsaved in the world have a glimpse of this kingdom seen in the way New Covenant believers live having had God’s love shed abroad in their hearts by the blessed Holy Spirit of God (John 13:35) (Romans 5:5).

We are told by the Lord Jesus in Matthew Chapter 24:14 that the Gospel of the Kingdom is to be preached as a testimony to all nations and only after this happens will the end come (Matthew 24:14). This Gospel of the Kingdom not only applies to His first coming as the suffering servant to die for our sins but also as the all- conquering King who will set up an earthly Kingdom that will never be destroyed (Daniel 2:44). And then we read…

“And He will be called Wonderful Counsellor, Mighty God, Everlasting Father, Prince of Peace”.

Here we see the Messiah our Lord Jesus given titles that can only apply to deity. He is called; “Wonderful Counsellor.” We see this also referred to the blessed Holy Spirit who is himself called the counsellor because He is also God and equal in divinity with the Lord Jesus (John 15:26). Through the ministry of the Holy Spirit the Lord Jesus comforts, counsels and corrects us as His brothers and sisters spiritually speaking.

Then we are told he is called; “Mighty God” being a direct reference to His divinity and that He is God and equal with God in all of His divine attributes. As the Lord Jesus aid “I and the father are one” and again He said; “He that has seen Me has seen the Father.” He was around in the Old Testament before He was incarnated in a flesh and blood body. He appeared to many in the Old Testament in human form. This was why people could see God’s face and not die. The pre-incarnate Lord Jesus was the visible manifestation of the invisible God because He has always existed with God and in God and as God and the third member of the Tri-Unity within the Godhead.

Then we are also told He is the “Everlasting Father.” In saying the Lord Jesus is the Everlasting Father it is not telling is that He was the Father because when the Messiah walked the earth as a flesh and blood human being He prayed to his Father in Heaven. It is a reference again to the fact that the fullness of the deity of God the father dwelt fully in Him. Also the fact that He is titled “the Everlasting Father” reveals that He has a fatherly shepherd’s heart for those who are spiritually lost as well as those who wander from the sheep fold and He goes out to find them and bring them back home.

Then we are told He is called “The Prince of Peace” (Shalom). His peace is God’s peace that passes all human comprehension and there is no peace on earth or in the human heart that can match the peace He gives to all who repent of their sin and rebellion against God and put their faith in the Messiah to save them from their sins and to rescue them out of this present evil age according to the will of God His Father (John 14:27) (Philippians 4:7) (Luke 19:10) (Galatians 1:4).

Now we are also told that “Of the greatness of His government and peace there will be no end. He will reign on David’s throne and over his kingdom, establishing and upholding it with justice and righteousness from that time on and forever. The zeal of the Lord Almighty will accomplish this.”

The whole world is searching for a lasting peace yet it will not come until the Prince of Peace has returned. Once He has destroyed all opposition, raptured and resurrected the saints and rescued Israel as a nation only then will His peace reign over the entire earth As the prophet Isaiah also writes; “And He will judge between the nations, And will render decisions for many peoples; “And they will hammer their swords into ploughshares and their spears into pruning hooks. Nation will not lift up sword against nation, And never again will they learn war” (Isaiah 2:4).

We are also told in Psalm 89 “Mighty is Your arm; strong is Your hand. Your right hand is exalted. Righteousness and justice are the foundation of Your throne; loving devotion and faithfulness go before You” (Psalm 89:13-14). God’s right arm that is exulted is the Messiah our Lord Jesus who now sits enthroned in heaven at the Father’s right hand and He is destined to physically reign from Jerusalem on David’s throne. We are also told that the very foundation upon which His kingdom is built and endures for all eternity is justice and righteousness for all that will prevail for a thousand years on earth in the Millennial Messianic kingdom and then into all eternity. God’s zeal will accomplish this at the end of this present age.

At this time of the year we celebrate the birth of the baby in the manger but do we realise why He came into this world the first time? He came to save us from our sins and took the lowest place as a suffering servant to save us from sin’s power and its eternal penalty in hell, to deliver us out of this present evil age and out of the clutches of the devil (1 Corinthians 15:3) (Galatians 1:4). The second time He comes back it will not be as a suffering servant but as the all-conquering King of Kings and Lord of Lords and every knee shall bow to His sovereign rule (Revelation 19: 11-16) (Philippians 2:10-11).

God wants us to meet His dear Son at this Christmas season and to put things right with Him because when His beloved Son comes back for the second time there will be no reprieve for those who have neglected and rejected so great salvation and resisted the convicting power of the blessed Holy Spirit. Yes we remember at the incarnation that God is with us and for us and above all else wants to be in us. This is the greatest of all Christmas gifts!