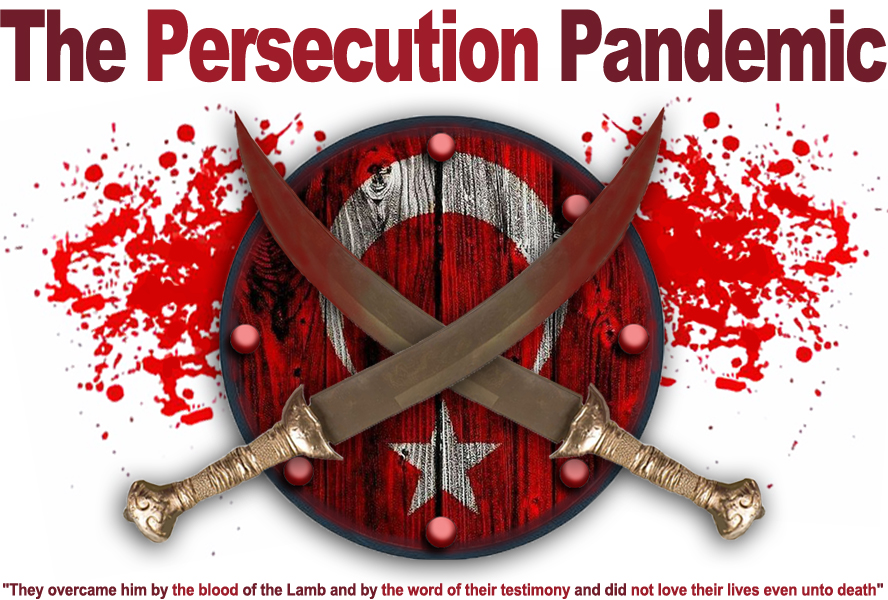 (Daniel 12:7) “I heard the man dressed in linen, who was above the waters of the river, as he raised his right hand and his left toward heaven, and swore by Him who lives forever that it would be for a time, times, and half a time; and as soon as they finish shattering the power of the holy people, all these events will be completed.”

(Daniel 7:29) “I kept looking, and that horn was waging war with the saints and overpowering them.”

(Revelation 13:5-7a) “There was given to him a mouth speaking arrogant words and blasphemies, and authority to act for forty-two months was given to him. And he opened his mouth in blasphemies against God, to blaspheme His name and His tabernacle, that is, those who dwell in heaven. It was also given to him to make war with the saints and to overcome them.”

I really enjoy watching the Gaither videos and have seen quite a few of them sometimes more than once and have found them by and large to be spiritually edifying and encouraging. There is no doubt that the American evangelic Church has produced some of the best Christian music and musicians and singers within Evangelical Christendom. You can see them on the internet and the congregations they minister to as well. It is quite noticeable by and large that the congregations are very well dressed and affluent as are the majority of the Churches in the Bible belts of America.

Looking at the congregations in the videos one could well think that most of them come from the Bible belts of America and are in those churches teaching a secret pre-tribulation rapture which says that the Church is removed before the coming of the man of sin and that the faithful Church will escape the coming tribulation. The evangelical/ charismatic assemblies and their pastors who teach this unbiblical doctrine by and large are not preparing their congregations for the pandemic of persecution that is coming to the western democracies founded upon Biblical Judeo-Christian teaching.

The pre-tribulation rapture is a very ‘comforting’ doctrine in the affluent, materialistic environment in most American Churches today. However, the Word of God teaches that for three and a half years just before our Lord Jesus the Messiah comes back that Israel, and by extension and inclusion the Body of the Messiah, will suffer persecution during the reign of the Islamic Antichrist throughout the realm of his empire (Daniel 7:25).

Already the persecution of Jews and Christians has been going on since the first century but today it is a global pandemic. One could even call it the Pandemic of Persecution and for the most part it is occurring in Islamic countries. While we see severe persecution in countries such as China and North Korea and to a degree in Russia it is Islam that is spearheading persecution and that on a global scale.

In a report in Forbes online earlier this year it states concerning Christian persecution; “On January 19, 2022, Open Doors, an international NGO advocating on behalf of persecuted Christians, released their annual World Watch List. The World Watch List assesses 50 countries where Christians face the most severe types of persecution. The newly published data reveals significant changes in the situation of Christian minorities around the world.

According to Open Doors research it states; “Seven of the top 10 worst countries on Open Doors’ 2022 World Watch List are majority Muslim nations, including Afghanistan (1), Somalia (3), Libya (4), Yemen (5), Eritrea (6), Pakistan (8), and Iran (9). North Korea (2) is predominantly an agnostic country. Hinduism is the primary religion in India (10). Extremist Hindu mobs frequently target Christians, while the government often ignores such attacks. Christianity is the main religion in Nigeria (7), but Islamic terrorist groups in the northern part of the country ruthlessly target believers.

In America, Great Britain, Australia, and in many European countries legislation is being mandated within their government enclaves that is diametrically opposite to the teaching of the Bible. Democracy and the principles of Judeo-Christianity as we have known it in the west is quickly vanishing as we see left-wing, socialist policies being implemented and forced upon the western democracies.

The World Economic Forum it would seem is leading the charge to bring about a new ‘reset’ of global proportions. Klaus Schwab, Founder and Executive Chairman of the World Economic Forum, has been at the centre of global affairs for over four decades. The organization is placing within world governments those loyal to its mandate for population control aided by technology.

At its core the WEF is an ideology of a Communist mindset where the masses are controlled from the top by a tyrannical, unprincipled, totalitarian regime of global bureaucrats who are above the law if the truth be known. The WEF have used the COVID-19 ‘pandemic’ to further their totalitarian agenda for the world. When it comes to morality, ethics and spiritual matters and democracy itself these aspects of life are not even on the radar or in line with the agenda of the WEF.

Be that as it may, the real threat to democracy, especially to Judaism and Christianity, is the beast empire of Islam. At present it is fragmented and divided and you have the two dominant divisions of Sunni and Shiite Islam. However, the whole Islamic world is waiting for the arrival of the Mahdi of whom they believe will lead the whole Muslim world on a Jihad of global proportions. It is very interesting that in the Bible the nations that are associated with Biblical prophecy are virtually all Islamic today and many of them are specifically named in the Bible.

We are also told in the Word of God that for the last three and a half years of this present age, being a time, times and half a time, that faithful Jews and New Covenant believers will be persecuted by the Islamic Antichrist within the realm of his vast empire. While the World Economic Forum continues to plan their ‘takeover’ of society it has yet to face the power of Islam. Already across Europe Muslims are entrenched within nations in that continent and many are holding and seeking high level positions in government.

Even in America there are high level Muslims on Biden’s Staff in the White House. Of course nothing has changed with Obama pulling Biden’s strings behind the scenes. When Obama was in the White House he entertained members of the Muslim Brotherhood. To sanction a nuclear deal with the Iranian regime back in 2015 when he was in office clearly showed Obama’s distain for Jews and his lack of care for Israel’s ongoing security. As for Biden he still sanctions the two-state solution from hell!

While persecution has always been the lot of faithful Jews and Christians down through history in these last days it will increase in frequency and intensity even more so than has already been happening. Both the prophet Daniel and the Apostle John tell us that in the last three and a half years of this present age that when the Antichrist, also known as the man of sin, appears centre stage in world affairs, that he will  blaspheme and curse God’s name and persecute the saints on a global scale.

Daniel writes; “He will speak out against the Most High and wear down the saints of the Highest One, and he will intend to make alterations in times and in law; and they will be given into his hand for a time, times, and half a time” (Daniel 7:25).

However, we are also told; “But the court will sit for judgment, and his dominion will be taken away, annihilated and destroyed forever. Then the sovereignty, the dominion and the greatness of all the kingdoms under the whole heaven will be given to the people of the saints of the Highest One; His kingdom will be an everlasting kingdom, and all the dominions will serve and obey Him” (Daniel 7:26-27).

When you look at events happening today on a global scale, but especially in the Middle-East, we see the world rapidly spinning out of control at every level of society. It is vital as New Covenant believers that we keep in mind that God is still in control and nothing happens without his consent. (Psalm 115:3) (Proverbs 19:21) (1 Chronicles 16:31) (Revelation 4:11).

The Triune God is sovereign over all He has created on earth and in the heavens and the universe and does what He wants, when He wants, in the way He wants and with whom He wants, and asks no man’s permission! To this the Word of God in its entirety testifies to this fact!

As He says in the prophet Isaiah; “Remember what happened long ago, for I am God, and there is no other; I am God, and there is none like Me. I declare the end from the beginning, and ancient times from what is still to come. I say, ‘My purpose will stand, and all My good pleasure I will accomplish.’ I summon a bird of prey from the east, a man for My purpose from a far-off land. Truly I have spoken, and truly I will bring it to pass. I have planned it, and I will surely do it” (Isaiah 40:9-11).

The Persecution Pandemic for faithful Jews and New Covenant believers is already here and rapidly spreading like gangrene through the nations and will come to a head just before the Messiah our Lord Jesus comes back. When the final persecution comes there will be many who will be killed for their loyalty to the Messiah our Lord Jesus but they will not be alone but strengthened by the Holy Spirit to endure to the very end. These will be supernaturally empowered by the Lord Jesus to overcome everything Satan sends their way.

As the apostle John writes; “They overcame him (Satan) by the blood of the Lamb and by the word of their testimony and did not love their lives even unto death” (Revelation 12:11).

Those whom God has justified, redeemed, cleansed and sanctified and whom He has protected from the coming wrath by the blood of the Messiah, who are sealed on their foreheads and in their hearts with the Holy Spirit marking them out as His own possession, will, at the end of this present age, inherit the Kingdom of the Messiah and co-reign with Him on earth in His Messianic Kingdom. This is our blessed hope as New Covenant believers! (Titus 2:13).

In that day after the Lord Jesus the Messiah has come back there will not be a pandemic of sin, lawlessness (Torahlessness), unrighteousness and injustice, but a pandemic of true righteousness, truth, justice, love, joy and peace in the Holy Spirit governing the entire planet! In that day we are also told in God’s Word that; “The law (Torah) will go out from Zion, the word of the Lord from Jerusalem... and that, “the earth will be filled with the knowledge of the glory of the LORD as the waters cover the sea” (Isaiah 2:3b) (Habakkuk 2:14).

This will be the pandemic well worth waiting for!!!