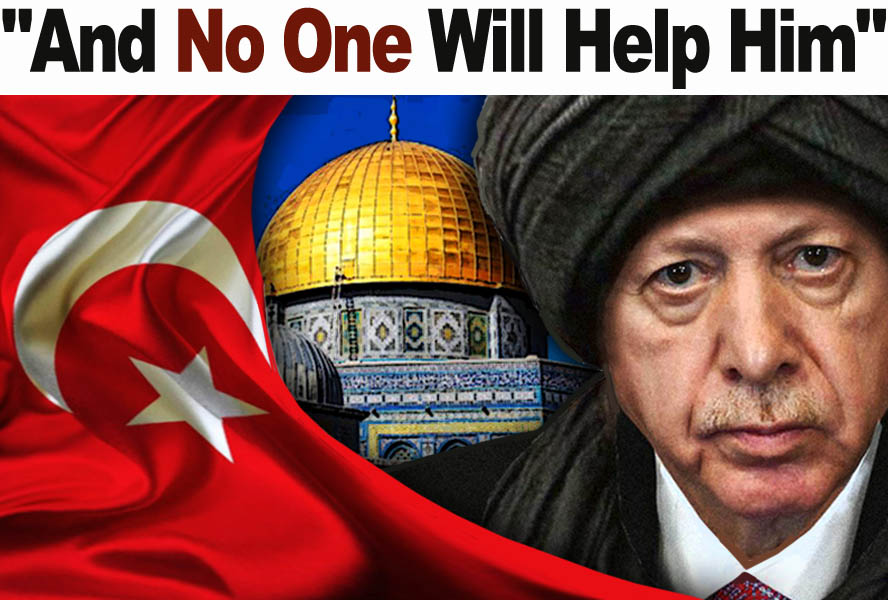 “He will pitch his royal tents between the seas at the beautiful holy mountain. Yet he will come to his end. And no one will help him” (Daniel 11:45).

Last Sunday it was reported in a leading Jewish publication online that Turkish President Tayyip Erdogan said he had told his Palestinian counterpart Mahmoud Abbas on the phone that he condemned Israeli “intervention on worshipers” at Jerusalem’s Al-Aqsa mosque. Erdogan’s comments came amid efforts by Turkey and Israel in recent weeks to normalize their long-strained ties, as part of a regional “charm offensive” launched by Ankara in 2020…

Erdogan also said on Twitter; “During our call, I told Mr Abbas that I strongly condemned Israel’s intervention on worshippers at Al-Aqsa Mosque and that we will stand against provocations and threats to its status or spirit.” He also added; “Turkey always stands with Palestine…” Erdogan said he thanked Abbas for his leadership through this crisis, calling for “all Palestinian groups to work together” and achieve Palestinian unity, possibly signalling a shift away from backing Hamas, at least publicly… Turkey, which supports a two-state solution to the Israeli-Palestinian conflict, has said it believes a rapprochement with Israel will also help find a solution to the issue, but that it would not abandon commitments to Palestinians for better ties with Israel.”

Once again it needs to be stated that the land of Israel is never called Palestine anywhere in the Bible. God does not call Israel Palestine; neither did the prophets, the Lord Jesus or the apostles. The word “Palestine” was derived from the name “Philistine” which the Romans called Israel attempting to defuse and destroy their uniqueness as a nation in God’s sight. God called the nation “Israel” after the Patriarch Jacob wrestled with the pre-incarnate Messiah who ended up calling Jacob by the name of “Israel” (Genesis 32:28). To call the land of Israel by any other name is to contradict God and show contempt for His sovereignty who has established Israel as a nation in His sight to be for the Jewish people “an everlasting possession” (Genesis 17:8).

Added to this the City of Jerusalem has been the eternal capital of Israel since the time of King David who took the city from the Jebusites and renamed it the City of David (2 Samuel 5:9). The Palestinians today are displaced Arabs and Jerusalem belongs to the Jewish people. God owns the land and has bequeathed it to the descendants of Abraham, Isaac and Jacob and not to the descendants of Ishmael and Esau, the fathers of the Arab nations today (Genesis 17:17-22).

Furthermore it also needs to be stated that though the nations will succeed in dividing up the Land of Israel and oppressing the Jewish people, these nations will be severely judged by God and that those who seek to move Jerusalem from its God-ordained status on earth will be torn or ripped apart! (Joel 3:2-3) (Zechariah 12:2-3).

Whether it is Turkey, the Egyptians, the whole Arab world or the European Union and the United States they all are committed to the Two-State Solution from hell! Whether Naftali Bennett and the Israeli government will cave in on this matter remains to be seen? Of course behind the whole scene is Satan seeking to destroy Israel because He knows that the Lord Jesus is the King of the Jews and the one destined to sit on the physical throne of David at Jerusalem. Satan wants to prevent it happening by destroying Israel but also knows that his time is now short and that he will never succeed or be able to stop the Second Coming of the Messiah our Lord Jesus, neither will Satan destroy the Jewish nation and the Israelites as they are called by God in scripture.

We know that the Messiah our Lord Jesus is already reigning on the throne of King David from the spiritual perspective but that after He has come back to earth will physically sit on David’s throne in Jerusalem. To this the scriptures testify! (Luke 1:32).

Now the man from Turkey clearly wants to have control of the Temple Mount. He says it is for the Palestinian cause but this is a ploy to mask his real intention to make his throne in Jerusalem and there to pitch his royal tents between the seas at the beautiful holy mountain. It is also clear that he sees himself as the future Caliph of the whole Islamic world and that if he can control Jerusalem then he will have the admiration of all Muslims globally.

We know from the creed of the Muslim brotherhood, which the man from Turkey embraces, that a global Islamic empire based on Sharia Law is their ultimate goal. Their creed is as follows; “Allah is our objective. The Prophet is our leader. Qur’an is our law. Jihad is our way. Dying in the way of Allah is our highest hope.” “Erdogan himself was jailed for four months in 1999 after reciting a poem to a crowd in south-eastern Turkey – it contained the lines “The minarets are our bayonets, the mosques are our barracks, the believers are our soldiers” and was judged seditious. Erdogan himself was then banned from holding political office. Yet, despite all these barriers, the AK party swept all but one of the existing parties off the political map making Erdogan the kingmaker of Turkish politics!

When you consider the Armenian Genocide perpetrated by the Ottoman Turkey it is clear that Jews and especially Christians are considered as ‘dead-meat’ in Turkish Ottoman Ideology! If Erdogan had no scruples about leading the prayers in the Hagia Sofia basilica, the Vatican of Eastern Christendom in Istanbul now converted into a Mosque, he would have no scruples about sitting in a rebuilt temple structure in Jerusalem from which he could rule over a Muslim Empire of global proportions.

We know from the Word of God that for three and a half years at the end of this present age that the Islamic Antichrist will make his headquarters at Jerusalem but also where he will meet his demise! As Daniel says about the Antichrist; “He will pitch his royal tents between the seas at the beautiful holy mountain. Yet he will come to his end. And no one will help him.”  It can be translated “he will plant the tents of his palace,” a Persian word denoting properly a large hall or throne-room. It can also be a royal pavilion.

The Holy Mountain is the original location of Mt Zion and where the Temple of the Lord stood and where God dwelt on earth through His Spirit and where He will install the Messiah to reign on earth in the Millennial Messianic kingdom to come (Isaiah 8:18) (Psalm 74:2) (Isaiah 24:23) (Psalm 2:6). The seas mentioned are the Mediterranean Sea and the Dead Sea.

It is interesting that the Apostle John seas the first Beast Empire arising out of the Sea. The Sea literally referred to the Mediterranean Sea but metaphorically describes the nations (Revelation 17:1). The Island of Patmos is located in the Mediterranean Sea just off from the coast of Turkey. We also know that Turkey will be the nation that will spew forth the Antichrist (Revelation 2:13) (Ezekiel 38:2). While the focus of the whole world is on Russia and Red China and the United States and Europe, behind the scenes the spectre of Islamic global dominance is fermenting as the man from Turkey maintains and pursues his globetrotting agenda seeking to resurrect the Turkish Ottoman Empire.

Satan knows his time is short and he is working overtime to bring his man to prominence in the world and will succeed for a short time being three and a half years, however for the sake of the elect saints, the Jewish remnant chosen by grace and by extension and inclusion the faithful Body of the Messiah spiritually grafted into Israel, and for the very survival of the planet itself, God will cut those days of tribulation short! (Matthew 24:21-22). Immediately after the tribulation of those days the rapture and resurrection will occur (Matthew 24:29-31) (1 Thessalonians 4:16-18).

The man of sin is coming and the persecution of the saints will reach its zenith, but so is the Messiah our Lord Jesus coming back and even though the Antichrist will pitch his royal tents between the seas at the beautiful holy mountain he will come to his end. And no one will help him!