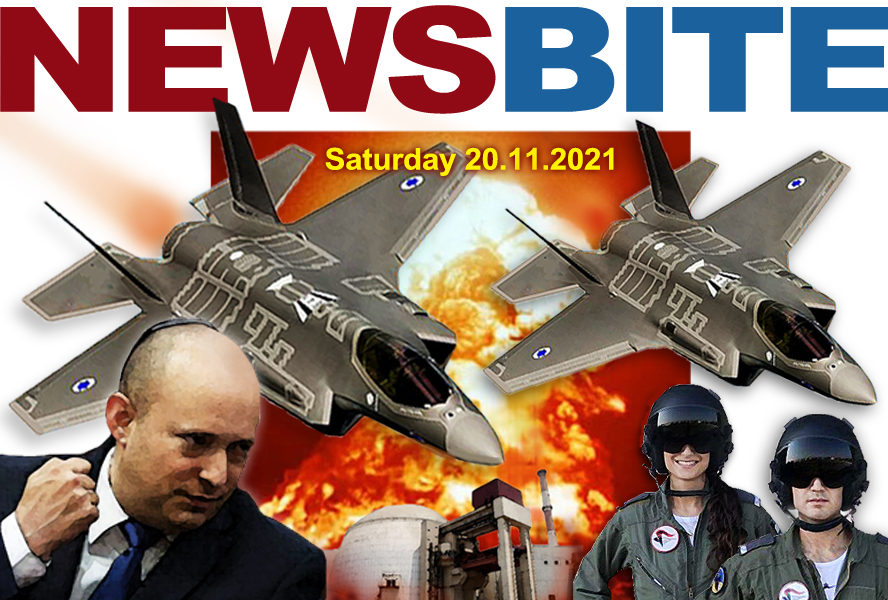 Earlier this week a headline appeared in the online edition of The Jerusalem Post which said; “Bennett: “No matter what happens with Iran talks, we’ll defend ourselves.” The article went on to say; “Prime Minister Naftali Bennett stressed that Israel would defend itself, no matter what happens in the nuclear talks between Iran and the world powers, during a visit to an exercise being carried out by the IDF in northern Israel on Tuesday.  “We are surrounded by security challenges and the goal is to take advantage of periods of relative quiet to build strength. Therefore, we are preparing for various scenarios, both near and far,” said Bennett. “We are dealing with Iran and its affiliates in Lebanon and Syria. No matter what happens between Iran and the superpowers, and we are certainly concerned about the fact that there is not enough toughness in the face of Iranian violations, Israel will defend itself, on its own.” During the visit, Defence Minister Benny Gantz stated that “we are of course following everything happening on all fronts.”

About 3,000 soldiers from the Golani Brigade, Armoured Corps, artillery and reserve brigades, along with intelligence and the Air Force, took part in the drill. “We found here a very cohesive and trained system that is gaining more and more capabilities, and I am very happy with what we have seen here,” said Gantz about the drill. “The state budget has been approved and this is especially important for the IDF, which can properly plan its resources, train continuously and intensively and invest everything it needs in preparing for the next war,” said Bennett.” (End of article)

It is quite astounding that the International community is pursuing the Iranian Nuclear Deal with the tyrannical Iranian regime. Israel it seems is the only nation that knows full-well what they are dealing with concerning Iran’s militancy against the Jewish state and the west. Recently another video appeared online, and there have been others, showing a huge Iranian crowd shouting “Death to Israel” “Death to America.” We know that Iran is fighting a proxy war against Israel from Syria and through Hezbollah in Lebanon and through Hamas in Gaza. Added to this the Iranian regime continues to fight their proxy war against the Saudis through the Houthi rebels based in Yemen. In fact all of the moderate Arab States located in the Saudi Arabian Peninsula are worried about Iran’s rapid development of their nuclear capability.

According to another report in the online edition of Honest Reporting it states; “Iran has reportedly resumed production of advanced centrifuges at a nuclear site that it accused Israel’s Mossad spy agency of blowing up in June. Sources familiar with Iran’s activities say that the Karaj nuclear facility restarted in August, and operations have since ramped up. The sources expressed concern that Iran could divert advanced centrifuges to undeclared sites in order to move closer to a nuclear weapon. One diplomat suggested that enough parts for 170 centrifuges have been produced since the facility reopened. Centrifuges are necessary to enrich uranium, which can be used for both civilian applications or — at higher levels of purity — to produce nuclear weapons.

Since the renewal of production, Iran has reportedly refused access to the facility by inspectors from the International Atomic Energy Agency (IAEA). In September, the Islamic Republic acknowledged that it had removed surveillance cameras installed by nuclear inspectors. The head of the IAEA said last month that its monitoring program at the facility was “no longer intact.” (End of article)

When you look at the overall situation in the Middle-East there is no doubt that a major war is looming on the horizon that more than likely will be instigated by Iran. While the European Union and America continue to continue their ‘tap-dance’ with the Iranian regime Israel is preparing for an all-out war with Iran. We know from the Book of Daniel that there is a very powerful principality or entity in the unseen spiritual realm in the atmosphere just above the surface of the earth that is controlling the Iranian Regime. This principality appears in Daniel Chapter 10 where we see it for twenty-one days resisting the pre-incarnate Messiah and Michael the Archangel of war. This principality was seeking to prevent the answer to Daniel’s prayers concerning Israel (Daniel 10:12-13). The context is set in the future (Daniel 10:14).

When we see this conflict taking place it is occurring in the eternal unseen spiritual realm where time does not exist as it does down here on earth. In the unseen spiritual realm connected to eternity, the past, the present and the future all run together. There is no doubt that it was happening in Daniel’s time but prophetically it also applies to the time of the end where we see this principality in power over Iran today (Daniel 10:20). In fact it relates to a great war at the end of time directly related to Israel (Daniel 10:1). If the leaders of Israel know beforehand that a missile attack is imminent on Israel they more than likely will make the first strike and take out Iran’s eight nuclear sites being Arak, Bushehr, Darkhovin,  Fordow, Natanz, Isfahan and the Karaj nuclear facility restarted in August. An Israeli air strike may not take out all of the nuclear facilities but those that have a direct connection to developing a nuclear weapon.

If the Israelis hit Iran hard it may be the catalyst that will see Turkey make its move against Israel (Ezekiel 38:1-6) In Daniel Chapter 10 we are also told that after the Messiah has fought the principality over Iran that the principality of Greece will come (Daniel 10:20). In the Hebrew text the word for Greece or “Grecia” (KJV) is “Yavan” or “Ionia” which today is located in modern day Turkey. Ionia (as it was called then) was part of the eastern leg of the empire of Alexander the Great. We know that when the Ezekiel 38 invasion of Israel occurs that there will also be a great conflict in the unseen spiritual realm as it will be the battle of all battles for the City of Jerusalem. Michael the Archangel will also be engaged in this war (Daniel 10:21; 12:1).

Satan knows that if he can destroy Israel he will prevent the Second Coming of the Messiah. However, Satan has already lost the war and there is no way he will be able to prevent the Second Coming of the Messiah our Lord Jesus to rescue Israel as a nation including all New Covenant believers in the Body of the Messiah grafted into the Commonwealth of Israel (Romans 11:17-18) (Ephesians 2:11-22). When you consider all of the attacks that have occurred against Israel since its rebirth as a nation in 1948 it is clear that the Lord has been watching over His people, not only because of his covenant made with them, but because His gifts and call are irrevocable (Romans 11:29).

As He Himself has said through the prophet Isaiah; “Remember what happened long ago, for I am God, and there is no other; I am God, and there is none like Me. I declare the end from the beginning, and ancient times from what is still to come. I say, ‘My purpose will stand, and all My good pleasure I will accomplish.’ I summon a bird of prey from the east, a man for My purpose from a far-off land. Truly I have spoken, and truly I will bring it to pass. I have planned it, and I will surely do it” (Isaiah 46:9-11).

War is coming to the Middle-East. God’s Word has predicted this great end-time war. It will be a war unlike any previous war in past history (Revelation 9:13:19) (Revelation 16:12-14). The springboard that will launch this war may well be the war between Israel with Iran.  Let’s face the fact that it is only Israel that is prepared to take the fight to Iran. Forget the international community who may well “rattle their sabres” but do nothing to restrain the madness and militancy of the Mullah’s. If the Israelis have Intel concerning an imminent threat from the Iranians, then they will not hesitate to make the first strike! Prime Minister Naftali Bennett did not mince his words when he stated “Israel will defend itself, on its own.”

What he and the leaders of Israel really need to come to terms with is that God has come and redeemed His people from a far greater enemy, being sin and hell, and that He has raised up for them a horn of salvation from the House of His servant David being the Messiah our Lord Jesus, to bring about salvation from their enemies and from the hand of all who hate them-to show mercy to their fathers and to remember His holy covenant, the oath that He swore to their father Abraham, to rescue them from the hand of their enemies, to enable them to serve Him without fear in holiness and righteousness before Him all their days (Luke 1:68-75).

At the end of this age the only hope for the survival of Israel, for the faithful Body of the Messiah and for the very survival of the planet will be the Second Coming of the Messiah our Lord Jesus (Matthew 24:21-22). Indeed we are told in Psalm 24 “Who is this King of Glory? The LORD strong and mighty, the LORD mighty in battle” (Psalm 24:8).