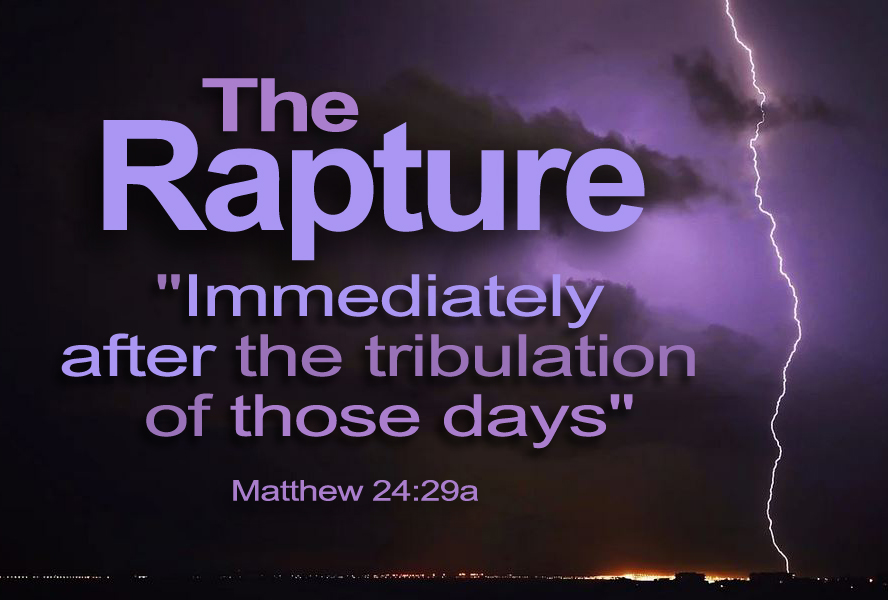 (Matthew 24:29-31) “Immediately after the tribulation of those days “‘the sun will be darkened, and the moon will not give its light; the stars will fall from the sky, and the heavenly bodies will be shaken.’ “At that time the sign of the Son of Man will appear in the sky, and all the nations of the earth will mourn. They will see the Son of Man coming on the clouds of the sky, with power and great glory. And he will send his angels with a loud trumpet call, and they will gather his elect from the four winds, from one end of the heavens to the other.”

Today the majority of Bible believing Christians believes that “the blessed hope” of the believer is the pre-tribulation rapture of the faithful Church and also believes and teaches that the Second Coming of the Lord Jesus will be in two phases. The first phase happens when the Lord Jesus comes for His saints and the second phase happens when He comes with the saints seven years later. However, nowhere in the Bible are we taught that there will be a secret pre-tribulation rapture before the Antichrist arises and that there will be a seven year period of Great Tribulation. You can only prove a three and a half years of Great Tribulation being 1,260 days, 42 months and a time, times and half a time.

In fact scripture clearly teaches that there is only one Second Coming of the Messiah our Lord Jesus. We know that when the Lord Jesus comes back that it will be an awe inspiring public event that everyone will see (Matthew 24:27) (Revelation 1:7). It will happen immediately after the tribulation of those days when the whole world will be in an advanced state of spiritual decay with the ‘vultures’ of every kind of false prophets and teachers and spiritual deception rampant within Israel and within wider Christendom and within the world. (Matthew 24: 28). We are also told that immediately after the tribulation of those days that the sun will be darkened, and the moon will not give its light; the stars will fall from the sky, and the heavenly bodies will be shaken (Matthew 24:29). (See also Isaiah 13:9-13) (Joel 3: 30-32) (Revelation 6:12-17).

After these changes in the constellations and right at the end of this time of great Tribulation, the rapture and resurrection will occur. The Lord Jesus will appear and everyone will see Him coming in the clouds as the sky rolls up like a scroll (Isaiah 34:4) (Revelation 6:14). This will be no secret coming, but one that will reveal His glory, His eternal power, His holiness and righteousness and His divine wrath to the whole planet.

The idea in the phrase “to meet” signifies “that an important dignitary is coming towards a city and the people of the city go out to meet him and gather around him and then accompany Him back into the city.” In other words when the Lord Jesus appears in the clouds, being His glorious appearing, He gathers His elect to Himself as the rapture and resurrection occurs, and then the saints return with Him to earth.

Also notice in both the Matthew reference and the 2st Thessalonians reference that the blast of the trumpet is sounded. This is the last trumpet which announces the arrival of the king! This awesome one-time event is also described in 1 Corinthians 15:51-52 where we are told that at the sound of the last trumpet the rapture and resurrection occur simultaneously, being the one and the same event, and where those gathered from the four winds of heaven and from the four corners or ends of the earth receive their resurrected glorified immortal bodies. This awesome event is further affirmed in Revelation 11:15 where the seventh and last trumpet is sounded and loud voices in heaven announce the Second Coming of the Messiah to set up His Messianic Kingdom on earth.

All of these texts mentioned are describing the one and the same event, being the rapture and resurrection of the Body of the Messiah, the faithful assembly, immediately after the tribulation of those days (Matthew 24:29). Some will say that “the elect” in Matthew and in Mark are referring only to the Jews but this is restricting the term elect. Matthew and mark describe a global gathering and one not restricted only to the Jews in Israel. The “elect” are all faithful New Covenant believers, being both Jews and gentiles as one new man in the Messiah. The same Greek word “elect” is used elsewhere in the New Testament to refer to New Covenant believers corporately as a body (Matthew 24:14, 22) (Romans 11:7) (2 Timothy 2:10) (Titus 1:1) (1 Peter 1:1). If you are a New Covenant believer, then you are a part of God’s elect people, being a company of Jewish and gentile believers that together are one new family in the Messiah! (Ephesians 2:14-16).

If you read carefully the text of 2nd Thessalonians 2:1-12 you will see that that the coming of the Lord and believers being gathered to Him are the one and the same event. The coming of the Lord and the our being gathered together to meet Him is a conjunction in the Greek text denoting these two phrases are joined and connected with each other and nor separate from each other (Vs.1) This event is directly connected with the Day of the Lord (vs.3) which includes the apostasy and the revealing of the man of sin, the antichrist and the judgements (Vs.3-4).

Now if the faithful elect saints, the Body of the Messiah, was to be removed before the man of sin is revealed then why would Paul have taught them about this if the faithful Church was no longer on earth?  Paul had clearly taught that the apostasy and all kinds of counterfeit miracles, signs and wonders would precede the coming of the man of sin or lawlessness (Torahlessness) and other prophetic truths  (2 Thessalonians 2:5).

We also know that within the realm of the beast empire of the Man of sin, which will be vast and one of global proportions, that New Covenant believers, also called “saints,” will be persecuted for the last three and a half years of this present age (42 months) (Revelation 13:5-7) (Daniel 7:21, 25; 12:7). The “saints” used in Revelation and Daniel is the same word used for all believers. The whole idea of a secret pre-tribulation rapture, and that the Second Coming of the Messiah our Lord Jesus is in two phases, is just not scriptural! This idea was spawned in the late 19th Century but was never held by the apostles or by the Church before the 19th Century.

Even the Church fathers going all the way back to the time of the apostles all taught that at the end of the age that the Christian Church would be persecuted by the antichrist. After Islam was given birth many of the Church fathers especially in the Middle-Eastern Church, said and wrote that the antichrist would be a Muslim. Interesting times we live in today when we see the rise of the Islamic beast empire!

We see China and Russia starting to implement and impose their expansionist agenda on the world and highly likely they will be part of the ‘birth pains’ that it would seem are upon us! North Korea is now threatening to use nuclear weapons against America and South Korea if the Americans continue to keep their forces in South Korea! However, the modern ‘Babylonians’ that will confront Israel and Christendom on a global scale including the western democracies will be Islam, but this is another subject for another time.

“The Blessed Hope” is not the rapture. The rapture is a part of the blessed hope of every born again, blood redeemed, blood washed Spirit filled New Covenant believer. “The Blessed Hope,” which includes the rapture and resurrection, is the visible Second Coming to earth of the Messiah our Lord Jesus, to judge the nations, destroy all opposition, rapture and resurrect all the saints, and to rescue Israel! After this the Messianic Millennial kingdom of God on earth will commence. We are to long for His appearing! (2 Timothy 4:8) (Hebrews 9:28).

The whole idea of a secret pre-tribulation rapture is a spiritually deceptive doctrine that is not preparing the Body if the Messiah for the final persecution of global proportions that is coming! Already persecution has been happening since the first century down to the present day. When you think of the terrible atrocities in our world being perpetrated on faithful New Covenant believers, will what the antichrist do be any worse? Persecution can only become more frequent, intense and widespread, even reaching into the western democracies.

The whole idea of a pretribulation ‘escape’ sits very comfortably within the comfort zones of western Christendom. No wonder that the Left Behind franchise of books and movies have been best sellers for unnumbered multitudes of believers, where up until now, have seen nothing like our dear brothers and sisters have experienced in Islamic countries.

The idea of western believers being persecuted does not sit well with multitudes of pastors and their congregations who teach and believe that the rapture is imminent and will occur even before the man of sin is revealed. However, what will those pastors and ministers who teach the pretribulation rapture say to their congregations when the man of sin is revealed and the persecution starts and the Church is still here?