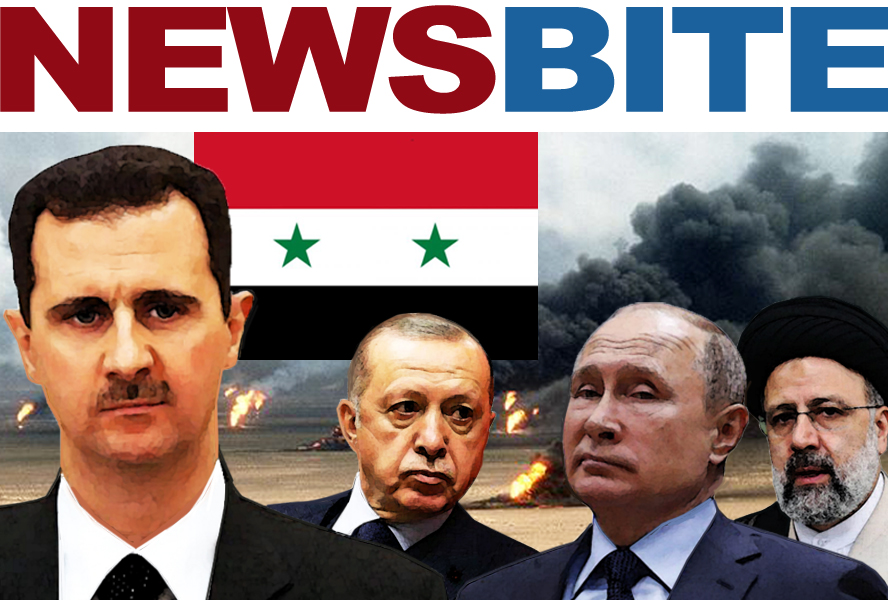 According to an article in the Jerusalem Post earlier this week it stated that there were reports of Russia transferring its military units out of Syria to re-enforce its military units in the Ukraine. If this happens then Iran may well benefit from this withdrawal of Russian forces but it is not entirely clear if Iran can move units into areas the Russians are leaving, or if the Russians really are moving units out at all, or merely rotating units around.

Even if Moscow is moving out of areas in Syria, this may not benefit Iran because while Tehran prefers to use Syria as a launching pad for its threats and proxy wars against the Arab states in Saudi Arabia and against Israel, it prefers to hide behind the Russian role in Syria, which had conferred some supposed legitimacy and security for the Syrian regime. With less Russia in Syria, Iran could be more exposed, even if it takes short-term advantage.

What is known is that Syrian regime leader Bashar Assad met with the Iranian leadership last Sunday, the same day as the reports emerged. Assad has just appointed a new defence minister and a chief of general staff, both of which are regarded as overtly pro-Iranian. Assad is seeking to strengthen his ties with Iran as he sees Russian support waning.

The report at the Moscow Times said that “Russia has begun the process of withdrawing its military forces from Syria and is concentrating them at three airports before being transferred to the Ukrainian front.” Russia held its May 9 Victory Day celebrations on this past Monday. “The abandoned air bases of the Russian Federation are transferred to the Iranian military-political formation ‘Islamic Revolutionary Guard Corps’ and the Lebanese terrorist organization Hezbollah,” the Moscow Times report said.

If this transition of power occurs in Syria it will leave the Assad regime with less support and possibly weaken Assad’s power, which has been bolstered by the Russian presence in Syria. Iran’s leadership sees Syria as a close ally in its opposition to its regional archenemy Israel. Iran’s economic influence in Syria has also grown in recent years, with Tehran offering credit lines to the Damascus government and Iranian companies winning lucrative business contracts.

Tehran has also given crucial military and financial assistance to Assad in the Syrian civil war, saying it has deployed forces in Syria at the invitation of Damascus, but only as advisers. Iran’s proxy militias, including Lebanon’s Hezbollah, are however, known to have given active support to Syrian government forces in the conflict.

What is also very clear is that the one common bond between the Syrian and Iranian regimes is their militancy and their obsession with destroying Israel. So if Russia withdraws from Syria then it would further facilitate and even ‘up the ante’ for an increase in Syrian and Iranian aggression towards Israel. Another factor to this whole changing scenario is the fact that Turkey still occupies Northern Syria. We know from God’s Word that the Syrian regime will go and that Damascus will become “a ruinous heap” (Isaiah 17:1).

After this happens more than likely Erdogan will make his move to gain control of Syria in order to expand Turkey’s power in the region. Most likely in Erdogan’s mind is the expansion of a resurrected Turkish Ottoman Empire, seeing Turkey is located on Syria’s Northern border. This expansion of Turkish power will not pose a problem for Iran because the Iranian regime and the Erdogan regime both have a common goal, namely to destroy Israel.

Adding fuel to the fire is the fact that the Israeli government under Naftali Bennet is not doing well. Last Monday Prime Minister Naftali Bennett’s governing coalition staved off a major opposition challenge as the Knesset reconvened for its summer session, showing it still has some muscle and seeking to disprove predictions of its imminent collapse. However, the six-member, majority-Arab Joint List party actively helped to derail the Likud-led measure, with its MKs either voting against it or not being present in the plenum.

The members of the Arab Joint List party know that Naftali Bennett is not really a strong leader and that the last thing they want to see is a return of a Benjamin Netanyahu led government because they know that he will take a very strong stand against the interests of the Palestinian Authority which are undoubtedly favoured by the Arab Joint List Party.

While the focus of the media is on Russia’s war with Ukraine and China’s growing military threat, the man from Turkey continues his globetrotting quest to see the Turkish Ottoman Empire resurrected. We know from God’s Word that ultimately Turkey will lead the Ezekiel Chapter 38 invasion of Israel and that Iranian military forces will be supporting the invasion (Ezekiel 38:1-6). We also know from God’s Word that Israel, it would seem, will have a confrontation with Iran before the Ezekiel 38 invasion actually commences (Daniel 10:13-14,20).

This week the IDF in Israel have launched a month-long, full-scale war exercise dubbed “Chariots of Fire.” It is clear that the Israeli government know that the stakes are much higher as far as preserving the security of Israel against her implacable militant Islamic enemies they are facing on all sides.

As for Israel, they are as yet to face their darkest hour when they pass through the Time of Jacob’s Trouble, but they will be saved out of it at the end when the Messiah our Lord Jesus descends from heaven to earth to stand once more on the Mount of Olives (Jeremiah 30:1-9) (Zechariah 14:4).